When you think of cities with great food scenes in the US, Pittsburgh doesn’t usually come to mind. Those who have visited or lived in the Steel City know very well that the food scene is thriving. Pittsburgh has the third-most restaurants per residents in the country. New trendy restaurants are constantly popping up across the various neighborhoods and downtown area of the The Burgh’ while established favorites continue to impress. In fact, in 2015 Pittsburgh was named Zagat’s top food city. While living in Pittsburgh, one of my absolute favorite spots to eat at was Gaucho Parrilla Argentina in the city’s wacky and wonderful Strip District.

Gaucho Parrilla Argentina serves wood-fired cuisine like steak and vegetables influenced by Argentinian cooking. As is a trend in several Pittsburgh restaurants, Gaucho is BYOB and has no corkage or bottle fees. This meat-focused, sandwich slinging shop was placed on Yelp’s top 100 places to eat list in 2015 at #7 and in 2016 at #36. It is no wonder then why every day customers brave long lines to order their marvelous meats and other treats at the counter. After ordering food at the counter, patrons can make their way to a table, inside the shop or outside on their patio, where a food runner will deliver the order once cooked. While the line can be grueling at times, the food is well worth the wait!

Once inside the restaurant a huge chalkboard highlights all the wonderful appetizers, salads, steaks, seafood, sides, and sandwiches. With a completely comprehensive menu Gaucho has something delicious to offer for everyone, whether an avid meat-eater or hardcore vegetarian. While you cannot choose wrong at this grilling haven, there are particular items that stand out.

At Gaucho the main focus is on the meat, but there are plenty of tasty sides to go with your meal as well. An order of the Vegetales provides a great accompaniment to steaks with juicy, fire roasted caramelized onions, red peppers, asparagus, zucchini, yellow squash, and mushrooms. Other delicious vegetable small plates that go well with tender cuts of carne or sandwiches include the Maiz (a whole grilled corn on the cob with olive oil and salt) and Fungos (pan roasted mushrooms with shallots, rosemary, and sherry wine vinegar). In the end though a side that should always be had with your mound of meat is the Papas al horno which are oven roasted red potatoes with whole garlic cloves and fresh rosemary. The potatoes are nice and crispy with savory seasoning that is complimentary to any steak or sandwich.

Plenty of other items exist on Gaucho’s menu that can be shared as a small plate or eaten on its own as the main course. Offerings that I have yet to eat include multiple salads, sweet or spicy Chorizo, and Family Style Paella. When dining with my parents on a beautiful summer night they split an order of the Clams and Mussels which are served with crunchy slices of toast and flavored with white wine, spring onions, grape tomatoes, and grilled lemon. They seemed to enjoy the dish thoroughly, eating every last bit of each sea creature that lurked in the bowl’s broth. Many times when I went to Gaucho my friends and I would order some exquisite empanadas, homemade with daily selections of fillings like chicken, pork, and beef. The flavorful and juicy meat on the inside combines with the crunchy and perfectly baked dough to make for an amazing appetizer or stellar snack.

Before I start talking meat here I have to introduce the unsung heroes at Gaucho Parrilla Argentina, the salsas. A stand in the middle of the restaurant allows customers to choose the type and amount of sauces that they would like for slathering over their sides, steak platters, and sandwiches. While most of the dishes Gaucho offered could be very much enjoyed without these sauces, this extra touch helps to move this restaurant’s food into the upper echelon. Varieties include the classic Chimichurri, Ajo (roasted garlic), Pimenton (red pepper), and Cebolla (caramelized onion). All of the sensational sauces are delicious and I recommend  trying them all to find your stand outs. My two personal favorites are the Ajo for its rich and savory taste and the Pimenton for its sweet flavor and slightly spicy kick.

Different cuts of steak at Gaucho can be ordered in small or large sizes. Choices include Bife de Chorizo (NY Strip steak), Bife de Gaucho (Ribeye), Lomo (Filet), Vacio (Sirloin), and Arrachera (Flank steak). All steaks are masterfully cooked over a wood fire and served with casa salad, crispy toast, and chimicurri sauce. While all the cuts of steak are high quality and full of flavor my favorite types are the Bife de Chorizo and the Lomo, mainly for these dish’s exquisite tenderness. If you have friends to split with and wish to be in steak sublime then be sure to order the succulent Asado plate which comes with all five cuts of steak totaling 25 ounces. When with my parents at Gaucho we ordered this massive steak platter among many other sides and appetizers, our eyes too big for our stomachs. However, our taste buds were certainly content throughout our meal.

Other fantastic plates that can be ordered at Gaucho Parrilla Argentina include pork, chorizo, chicken, lamb chops, shrimp, and fish. Check out Gaucho’s menu of their special plates here.

For good measure I urge you to take a long hard look at the beautiful montage of meat below from Gaucho’s website! Ok I know you are excited but you are starting to drool right now so keep it together. 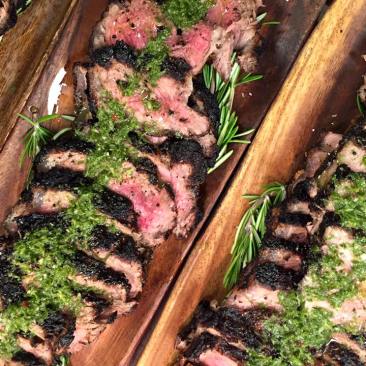 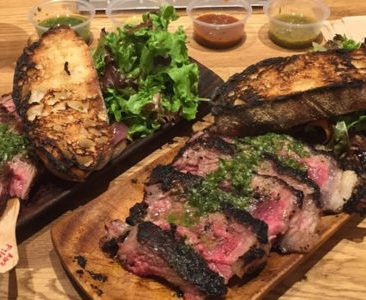 While the steak platters are the bees knees, Gaucho’s sandwiches are my favorite options on the menu and blow a certain Pittsburgh sandwich favorite (cough cough Primanti Brothers) out of the water! For you veggie lovers, vegetarians and vegans there is the Vegetale Sandwich which comes with roasted red peppers, caramelized onions, grilled asparagus, roasted potatoes, and mushrooms. However, for you beef boys and steak sisters out there, I highly recommend the Rosemary Braised Beef Sandwich or the Bondiola Sandwich. The Rosemary Beef Sandwich is my favorite sandwich at Gaucho and one of my favorite sandwiches in America. The perfectly seasoned and cooked beef is served on thick slices of ciabatta bread topped with horseradish sauce and caramelized onions that goes well with any of Gaucho’s salsas. The Bondiola Sandwich is my runner-up and comes with roasted pulled pork, spicy mustard, and caramelized onions wedged in between two crispy pieces of bread. You won’t be disappointed with other delicious sandwiches on the menu either, which include the Pollo Sandwich (chicken), Chor Y Pan Sandwich (sausage), and the Carne Sandwich (steak). The Carne sandwich is a great way for someone looking for a lighter meal than that of a steak platter to try their choice of steak but in sandwich format.

With mouth watering cuts of meat, sensational sandwiches, and superb small plates and sides, it is no surprise that one can expect to wait over an hour in line at Gaucho Parrilla Argentina during the restaurant’s busiest hours. You are bound to make friends in line with strangers though. My parents and I were once given wine in line by a massive group of friendly hipsters in front of us who apologized for being such a big group. The whole experience of waiting and then discovering the magic of Gaucho bonds everyone involved. If in Pittsburgh I recommend you make Gaucho and its Strip District neighborhood one of your first stops, as both this restaurant and large area of local markets and shops is a great introduction to The Steel City.

1 thought on “Meat That Can’t Be Beat: Gaucho Parrilla Argentina”