After recently visiting some countries in Southeast Asia, I certainly feel more of a connection to this area’s culture, people, and food. Others who have visited this unique and vibrant part of the world will likely tell you that eating this food back in the US brings back fond memories. While I’ve never been to Malaysia, my girlfriend Erin is very familiar with this country and its food, as she spent close to a year teaching out there. When we heard that Chicago’s only Malaysian restaurant was out in Logan Square we knew we had to go give Serai a try. After dining there two times I can say it is a delightful dining experience that will introduce you to the unique flavors and smells of Southeast Asian cuisine.

Located on a quiet part of Milwaukee Avenue, Serai opened up its doors at the end of 2015, becoming Chicago’s first Malaysian restaurant to open since Penang in Chinatown was forced to close down after a fire in 2008. The two chefs at Serai are actually from the city of Penang in Malaysia, well-known for its fantastic food. The front of Serai is unassuming, but the inside is quite charming. As you enter the restaurant, one room is a bit more bare bones with bright lights and a couple of TVs. The main dining room is dimly lit with a stylish bar on one side, and trinkets and fun food quotes etched on a white wall on the other side. These elements make for a more fun dining atmosphere in the main dining room. 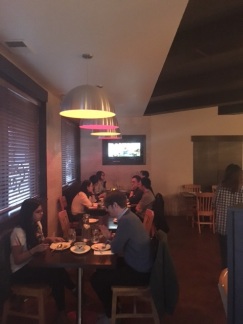 View of the front of Serai.

View in the back of the restaurant.

The bar at Serai.

Serai has a solid lineup of traditional Southeast Asian cocktails like the Singapore Sling, as well as other beverage options including fresh coconut juice served right in the coconut. As soon as I saw a whole coconut being served to a table nearby I knew I needed this refreshing drink ASAP.

The restaurant also offers up an array of delectable appetizers including the Satay Chicken, which is marinated with lemongrass and has a nice crispiness from some charring on the grill. The peanut sauce served on the side is extremely flavorful and gives the chicken a slightly sweet taste. Another appetizer I would highly recommend is the Roti Pratha, which is a fried Indian flatbread that is cooked over a flat grill, usually served with a vegetable or meat curry. The Roti Pratha at Serai is served with a delicious chicken and potato curry that is slightly spicy and rich in flavor.

Serai has a pretty extensive menu that covers beloved Malaysian dishes as well as well-known Thai and Chinese dishes. Erin’s favorite at Serai is the Mango Chicken, stir fried with bell peppers, onion, and mango in a sweet and spicy sauce. Another tasty fruit-forward dish is the Pineapple Fried Rice made with pineapple chunk fried rice with chicken and shrimp (we removed the shrimp due to my allergy) with spicy serai flavor. Serai, the namesake of the restaurant, is the Malaysian term for lemongrass. The herbal, sweet, and spicy flavors combine to stimulate the senses.

A dish that rarely disappoints is the popular Thai entree Drunken Noodles, which as the name suggests is served at several late night spots in Southeast Asia to many times inebriated customers. Serai serves this dish up with Thai style fried flat noodles with chicken, basil, carrot, string bean, mushroom, and peanut. Another great dish is the ginger beef which is stir fried in a ginger wine sauce and served in a clay pot. The ginger and sweet wine in the sauce make for a tasty marinade for the tender cuts of beef.

The best dish that I’ve had at Serai so far is the Lamb Rendang, which is lamb chunk slow cooked in coconut gravy and special spices that give the dish a bit of a kick. Rendang is a spicy meat dish which originated in Indonesia, and made its way over to Malaysia and other areas of Southeast Asia. The unique texture and tenderness of the lamb along with the flavorful sauce and spices make it dish delicious to eat on its own or paired with rice or vegetables.

Serai has a lot more traditional dishes to offer then what I’ve tried. It’s a restaurant that I certainly won’t get tired of going back to, with a large selection of dishes that offer differentiated styles, ingredients, and flavors. The food that I have tried at Serai confirm that the chefs there pay close attention to the detail and quality of their dishes, looking to bring the flavors of Malaysia to The Windy City. It’s a must try for any enthusiast of Southeast Asian cooking, and an amazing place for anyone looking to try Malaysian cooking for the first time.