In Texas, a state known for a range of barbecue styles, who reigns supreme? One city that has one of the most respected barbecue scenes in Texas is the state’s capital, Austin. The city is pretty much synonymous with live music, amazing nightlife, and barbecue. There are countless staples in the city but the most well-known is Franklin Barbecue, as its brisket is heralded as the best in the US. However, this recognition means you will have to wait in the most insane food line you’ve ever been in, with average wait times averaging about 3-4 hours.

In 2015 my friends and I visited Austin to ring in the new year and while we considered trying out Franklin Barbecue we heard from locals that there was another option in the city that was just as good and had shorter lines, albeit average wait times of 1-2 hours. That spot is La Barbecue, located in the East Cesar Chavez neighborhood of Austin. We woke up early in the morning and headed over around 10am before they opened at 11am to what would be about a three hour investment that was worth every minute waited and every penny spent. It changed the way I think about barbecue!

Picture of the Austin crew minus Ed our photographer 🙂

Ed and I embracing the cowboy spirit of Austin, Texas.

La Barbecue, like many other barbecue spots in Texas, was run out of a few trailers set up on their own plot of land when my friends and I visited. One trailer sells the fantastic meats while the other two contain massive pits where the products are cut, rubbed, and smoked for hours in an offset smoker. The joint opened up in 2012 after a former pit master from Franklin Barbecue, John Lewis, teamed up with LeAnn Mueller, the granddaughter of the Taylor Texas smoked meat legend, Louie Mueller. A few things have changed as the legendary John Lewis left La Barbecue in 2015 to open up his own BBQ spot in Charleston, South Carolina and Esaul Ramos was promoted to head pit master. The two current pit masters at La Barbecue are Brendan Lamb and Francisco Saucedo. The restaurant also moved in 2017 two minutes down the street to its current home, joining forces with Quickie Pickie on East Cesar Chavez, and now boasting indoor seating. 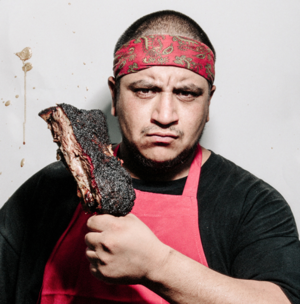 I can’t speak to the setup now, but when my friends and I arrived about an hour before La Barbecue was about to open there was already quite a sizable line, but we were undeterred as we could smell the aroma of smoked meats in the air. The line wrapped around the center of the land where there were plenty of picnic tables. From Friday through Sunday customers are treated to free beer while in line, but we were there on a Wednesday so no beer was had. We waited in close to a two hour line, but it actually ended up being a fun experience, as most people are friendly in line and you get to meet some locals and tourists alike. Many customers bring games to play while in line and luckily someone in our group had the game Heads Up ready to go which took up a nice chunk of time. It was difficult seeing platers of meat pass as by for that long though, as I was as excited as can be to take my first bite of legendary barbecue.

When we finally got to the front of the line to order we all knew we were going to order almost everything on the menu. When you wait in line this long, you feast! We ordered their brisket, pulled pork, turkey, pork ribs, beef ribs, and chipotle sausage along with sides like chipotle slaw, pickles, and bread. We sat down and gathered ourselves looking at the massive amount of meat that we had just ordered. I was salivating and legit almost started to drool. I wish I had taken more pictures as it was truly a thing of beauty that almost made my friend Ed cry. 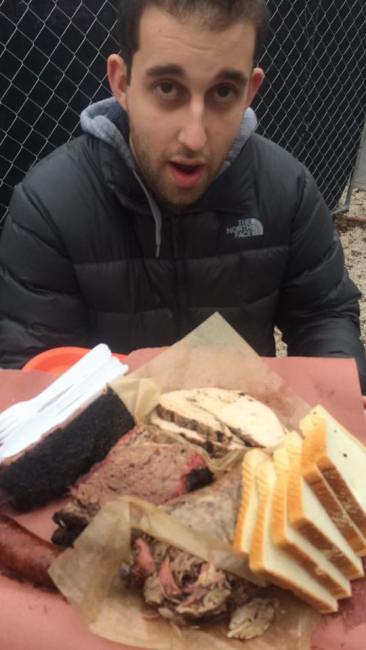 Perhaps the most excited I’ve ever been to eat a piece of food! 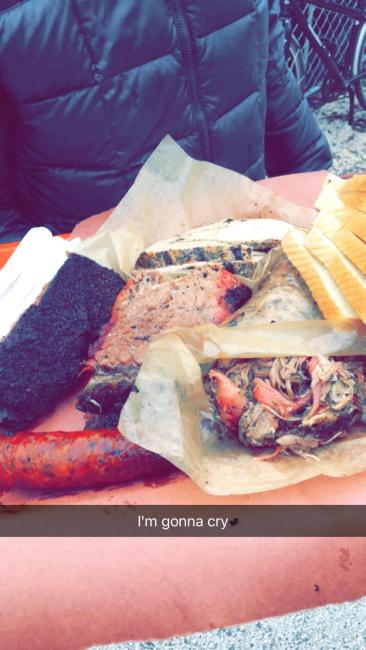 All this meat had my friend Ed feeling some type of way too, as he came close to shedding tears as seen in his Snapchat of the platter.

Lets start with the sides shall we? I’m not a big cole slaw or pickles guy usually but the slaw was just the right creaminess with a nice spice to it and the pickles had a great sweet and sour taste with a bit of spice from seasoning on it. The bread was, well, just regular white bread, but it made for a great base or sandwich maker for the meats.

The meat was absolutely incredible. All of the cuts were tender, juicy, and cooked to perfection. Ed Katsap summed it up well when he said, “I thought I knew what good BBQ was until I tried La Barbecue. Every single meat on the menu blew me away.” It has become my gold standard for barbecue and I compare any barbecue I eat to it now. The day I have better barbecue I’ll be sure to let you know, but for now I’ll give you my reviews on each type of meat individually.

Brisket (5/5): The brisket was out-of-this-world good and is the best I’ve had by a long shot. It was a bit crispy on the outside, seasoned to perfection, and incredibly tender on the inside with an amazing smoky taste. As my friend Alex Lapshin said, “It was the most tender brisket I’ve ever had.”

Sausage (5/5): The sausage was the surprise of the day as I was pretty unfamiliar with barbecue sausage before eating at La Barbecue. It was well cooked and had a perfect combination of smoky and spicy flavors from the cooking process and chipotle. It is the best sausage I’ve ever had the pleasure of eating. Alex mentioned that Ed, “ate the sausage in one swallow.” I’m not sure if that is true but if so I’m impressed with anyone who can get a whole sausage down in one swallow 😂

Beef Rib (5/5): Holy guacamole this thing was huge! It was oozing juice and was seasoned and cooked to perfection. The meat melted in my mouth.

Pulled Pork (5/5): The pulled pork was, just as the other cuts of meat, tender, succulent, with a bold savory and smoky flavor. It was excellent to put on bread and eat it as a sandwich for some extra texture.

Pork Ribs (4.5/5): The pork ribs were well cooked and the barbecue sauce on it was a bit sweeter from what I remember. In comparison with the beef ribs they were slightly more chewy, delivering a different mouth feel and taste.

Turkey (4.5/5): The turkey was definitely the most plain meat we had, but it was some of the most well-cooked and juicy turkey I’ve ever eaten. I don’t know that I’d wait in line just for the turkey, but it is a nice addition to add in with all the other meats for something a bit different.

It is safe to say that La Barbecue was the best that barbecue I’ve ever had. I would be more than willing to wait in the two hour line again for a taste of barbecue excellence. However, if you know that you will be going to Austin and you want to try La Barbecue without waiting in line you can order it at least five days out on their website and pick it up, walking in front of the line like a boss. But if you don’t know what your plans will be you can wait in line like most people and enjoy the sites, sounds, and smells of La Barbecue. One thing is for certain though, you will enjoy the tastes, textures, and flavors of the barbecue here and you’ll be hard pressed to find better barbecue anywhere else! For a bit more information and a close up view of their meats (#foodporn) click the link below to watch a two minute video and if you are in Austin, Texas DO NOT PASS THIS PLACE UP!

PS – For those living in the beautiful city of Los Angeles, word is La Barbecue will be opening up a spot there! La Barbecue, open up a spot in Chicago next maybe? 🙂