A few friends and I decided to say goodbye to the wacky year of 2017 and ring in the new year of 2018 in New Orleans. Half of them had never had the pleasure of visiting The Big Easy, but this was going to be my fifth time in the city, so I was extra excited to take them to some of my favorite music spots, bars, and especially the restaurants. But there was a part of me that also wanted to make sure we explored some new food spots along the way. After doing a bit of research I found the highly rated Galliano Restaurant and decided it would be a fantastic place to dine at on New Years Eve. I was wrong, despite a few stand out items, it was pretty mediocre. 😕

The restaurant is located downtown in the Warehouse District of New Orleans, about a three minute walk from the Mississippi river. Galliano Restaurant is fairly new, as it was opened in late 2016 by the owners of Restaurant Rebirth in New Orleans. The owners call Galliano their more “rustic, casual cousin.” Chef Ricky Cheramie focuses the menu on casual Cajun and Creole classics. The interior of the restaurant is spacious with a rustic feel from its brick walls, hanging lights, and exposed wooden fixtures on the ceiling.

Once we were seated our waiter came over asking if any of us wanted to start off with a drink. The restaurant has a nice selection of beers, wines, and cocktails to choose from. While others chose beer or wine, I went for the fresh made sangria. It was an average sangria, but it definitely hit the spot at the time. My friend Alan ordered a giant cocktail called the Rougaroux (can be seen on the upper left hand side of the image below) that was the restaurant’s version of a Hurricane cocktail. It was sweet, tangy, and extremely refreshing.

Although the restaurant wasn’t terribly loud our waiter had a difficult time hearing us, making the process of ordering our entrees and appetizers a bit awkward. After putting in our orders though we received the complimentary basket of hush puppies served with a white cream sauce for dipping that comes out when anyone dines at Galliano Restaurant. My friend Pete described the hush puppies as “dynamite” and I couldn’t agree more. They are the best hush puppies I’ve had, as they were fried to perfection with a ton of flavor and a soft yet smooth texture.

For an appetizer I ordered one of the most well-known and delicious southern dishes, gumbo. Galliano Restaurant’s gumbo is made with chicken andouille sausage, okra, and rice. The gumbo was seasoned perfectly and had an excellent balance of spicy and savory flavors, making it one of the best gumbos I’ve had in New Orleans. The only bone that I have to pick with this bowl was that the rice wasn’t fully cooked making it a bit hard and chewy to eat.

Our table ordered a variety of stunning-looking dishes. The dish that stood out the most from a plating standpoint was the pork chop dish that both Andy and Alan ordered. Galliano Restaurant’s Pork Chop La Place is a massive pork chop stuffed with andouille sausage topped with pickled red onion rings and tiger sauce, served with ham hock cornbread dressing and red beans. Andy said, “the pork chop was about the thiccums” and indeed it was thick, and possibly a little too much so. I gave Andy’s dish a try and while the pork chop was well-cooked I found the thickness of the it to outdo the textures and flavors of the andouille sausage found inside, as well as the sauce and cornbread stuffing. The best thing on the plate was the savory and buttery cornbread stuffing, which Andy said was the best thing he ate that night.

Galliano Restaurant was chock full of delicious sounding seafood and fish dishes, but unfortunately my allergies to all things from the sea do not allow me to enjoy some of the amazing Creole and Cajun cuisine. Instead I lived vicariously through my friend Pete who started off with a shrimp appetizer and worked his way to the stellar Catfish Creole entree. The catfish dish is a southern fried Louisiana wild caught catfish served with shrimp & andouille Creole with rice. Pete mentioned at dinner that the catfish melted in his mouth and later told me, “the catfish was cooked to baby bear perfection.”

Suprise, suprise! Erin and I decided to share plates for the hundreth time or so, and I wouldn’t have it any other way. One dish we ordered was fillet wrapped boudin sausage served with southern cooked greens, crowder peas, mirliton chow chow, and topped with blackberry sugar cane glaze. I wasn’t a big fan of the plating of the dish, as it kind of looked like three artificial meat towers rising up with a pile of random shit tossed in the middle. I first took a bite of the meat and it was extremely dry and plain tasting. When paired with the cooked greens and other components though it was eatable, but it was by no means a dish I’d ever order again. Erin was equally as un-thrilled with this dish that sounded much better on paper than it tasted.

The other dish that Erin and I split was the restaurant’s Sunday Pot Roast, consisting of slow-cooked boneless beef short ribs with Cajun “dirty” rice and Poor Man’s gravy. This dish was much better than the fillet wrapped boudin mess we had, but it was still a huge let down flavor wise. The meat was extremely tender and the rice was cooked this time! However, the dish lacked any bold flavor, making it a fairly mediocre dish.

We were all stuffed by the time the waiter came by to see if we wanted to try dessert, but Erin and I were craving something sweet to finish off the meal so we decided to take a look at the menu. Nine times out of ten if you take a look at the menu you probably are getting something. This time around there was no dessert menu, but rather the waiter rambled quickly through a few dessert options, highly recommending the Cherry Jubilee. The Cherry Jubilee is served with vanilla ice cream and once brought out to the table, it is topped with Bacardi 151 Rum and lit on fire to attain a smoky flavor. We decided why the hell not? Let’s get a dessert that gets set on fire! Bad choice! Erin and I thought it would have a mild rum taste, but either something went wrong with this dessert or Erin and I are a weaklings because once we tried our dessert it tasted like straight up Bacardi 151 Rum. 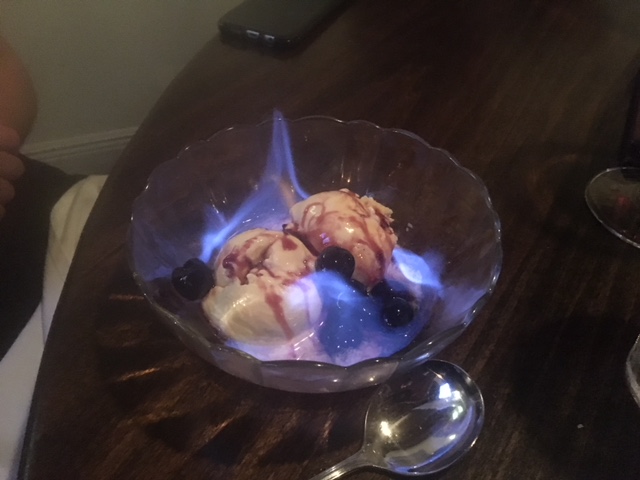 If you’ve ever had this type of liquor you know it is insanely strong and has an unpleasant taste, unless you are crazy and like taste of rubbing alcohol. Erin’s reaction was an immediate, “oh no” with a grumpy face and soon after I made the same sour face. It’s quite honestly one of the worst desserts I’ve ever had and while the food at Galliano’s started off great, it ended the restaurant’s downward spiral of a night in a bad fashion. We flagged down the waiter to tell him the dessert was not good and he apologized asking if we wanted a different dessert. At that point I think we were all just ready to get out and start partying for the new year, so we took a pass. He was nice and did not include this horrendous dessert on our bill.

Galliano Restaurant is a difficult spot to rate for me. It had several amazing reviews online but a series of mediocre dishes made it fall way short of the expectations I had for the place. While some dishes were not great, others were absolutely amazing; case in point the hush puppies, gumbo, and catfish Creole. It is a restaurant that I would likely give another try, ordering some different dishes like its Cajun Prime Rib or the Country Fried Filet Mignon, but it certainly isn’t a place that I will run back to when in New Orleans, a city filled with so many amazing spots to eat.